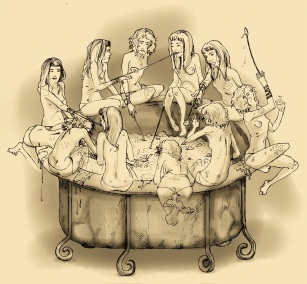 Today I found this nice story about Rabbi Haim of Romshishok „Heaven and Hell“ (below) and also a nice Video-Clip about the paralyzed situation the G20 are in (attached). Both made me think..

A lot of people in our society don’t feel yet that we „earthlings“ are connected to each other through visible and invisibles networks. A globalized system… Think of your breakfast coffee. Where would you get it if every country would cling to protectionism? What about electricity, food or heating fuel? We depend on each other like those starvin‘ peolpe in hell.
It doesn’t help to stand back and wait. Crisis and problems can be solved today only by uniting all our forces. Don’t wait until governments will start solving problems.
Start with treating your neighbor the way you treat a family member you like.
Actually, no need to tell you what to think, see for yourself:

Rabbi Haim of Romshishok was an itinerant preacher. He traveled from town to town delivering religious sermons that stressed the importance of respect for one’s fellow man. He often began his talks with the following story:

„I once ascended to the firmaments. I first went to see Hell and the sight was horrifying. Row after row of tables were laden with platters of sumptuous food, yet the people seated around the tables were pale and emaciated, moaning in hunger. As I came closer, I understood their predicament.

„Every person held a full spoon, but both arms were splinted with wooden slats so he could not bend either elbow to bring the food to his mouth. It broke my heart to hear the tortured groans of these poor people as they held their food so near but could not consume it.

„Next I went to visit Heaven. I was surprised to see the same setting I had witnessed in Hell – row after row of long tables laden with food. But in contrast to Hell, the people here in Heaven were sitting contentedly talking with each other, obviously sated from their sumptuous meal.

„As I came closer, I was amazed to discover that here, too, each person had his arms splinted on wooden slats that prevented him from bending his elbows. How, then, did they manage to eat?

„As I watched, a man picked up his spoon and dug it into the dish before him. Then he stretched across the table and fed the person across from him! The recipient of this kindness thanked him and returned the favor by leaning across the table to feed his benefactor.

I suddenly understood. Heaven and Hell offer the same circumstances and conditions. The critical difference is in the way the people treat each other.

I ran back to Hell to share this solution with the poor souls trapped there. I whispered in the ear of one starving man, „You do not have to go hungry. Use your spoon to feed your neighbor, and he will surely return the favor and feed you.“

„‚You expect me to feed the detestable man sitting across the table?‘ said the man angrily. ‚I would rather starve than give him the pleasure of eating!‘

„I then understood God’s wisdom in choosing who is worthy to go to Heaven and who deserves to go to Hell.“